Tips to play Guess Who, guess correctly in fewer turns! 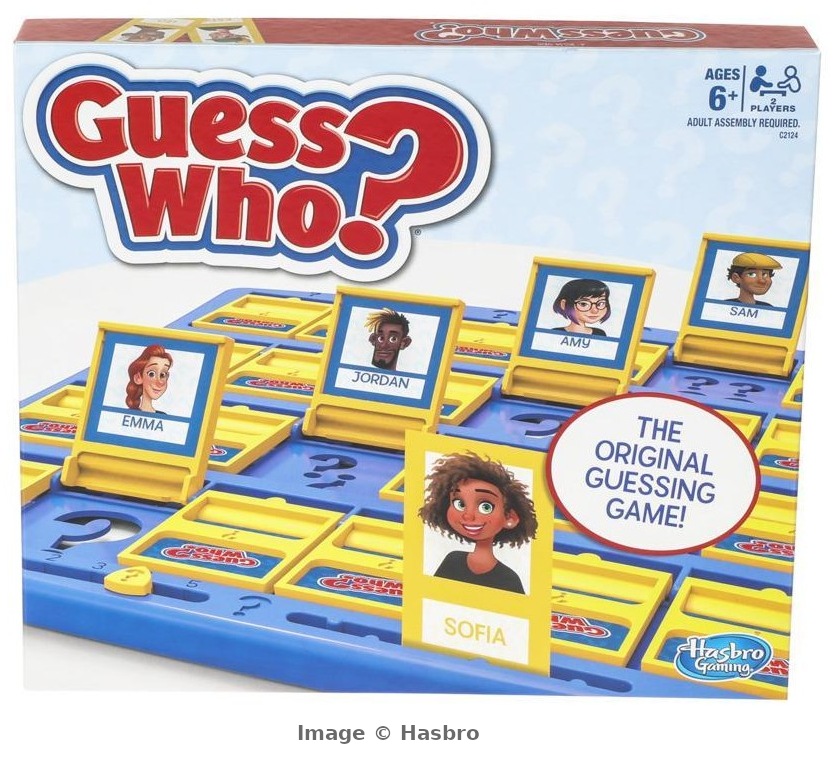 If you have ever played a game of Guess Who, you have probably wondered if the questions you are asking to eliminate the characters in the game are the best to ask. Hint: They probably aren't.

This guide will look at some of the best questions to ask in order to win a much higher percentage of times than the average player. Now, this does take a little bit of the fun out of the game, as you will generally be using statistical probability over curiosity, but the satisfaction of crushing your opponents - especially if they don't know that you are using a strategy - is magical!

Let's get into it!

Some math to get started

This isn't a math write-up, don't worry! But to understand some of the strategies, we're going to go over some simple math.

At the beginning of the game, there are two types of guesses that are prominent. First, we have broad guesses that aim to remove a meaningful amount of players from the very first guess. This could be a question such as "Does your person have a hat?". Since five characters wear a hat, this question will either remove five players who are wearing hats or 19 players who don't have one.

On the other hand, a narrow guess, such as is your person African-American, will eliminate either every character in the game or just a single one. Unfortunately, diversity didn't make its way to Guess Who in the '80s. This strategy gave the player a chance of winning in just a single turn but also a much larger risk of only eliminating a single character in a turn - a bad move.

So theoretically, using broad questions that knock off around 50% of the characters in the game each turn would result in a win almost every time in five or six moves. This is a strategy that is likely taken subconsciously each time a player plays without a strategy, although getting an elimination rate of 50% every time is difficult without asking more suitable, complex questions.

So if we assume that the average player who is not using a strategy is able to guess the correct person in six to seven moves, we have to do it in fewer moves, more often.

The rules of Guess Who stipulate that players can only ask yes or no questions, but they don't remove the option of asking complex questions, such as "Does your person have white or red hair?"

This is significant as it allows us to include exactly which characters we want to in our questions while still sticking to the rules, ensuring we almost always get our 50% elimination rate with each turn.

A great first question is, "Does your player have a man-made item on their face/head?" This question covers glasses, hats, jewelry, and bows. Asking the question will eliminate 11 or 13 of the characters in the first question. This is also a practical example of how complex questions can change the game for you.

Continue on asking questions that remove approximately 50% of the players with each turn, and you should be guaranteed a win by six turns, often in five.

Now, if you follow this method correctly, it shouldn't even matter what version of the game you play, as the questions are tailored to who is on the board rather than a run of fixed questions. That means you could theoretically play with random characters each time and still achieve excellent outcomes.

How to win more and more over time

Using this strategy, we can assume that you will win around 80% of games, accounting for those you will lose due to sheer chance and luck from the other player. That's a pretty great win rate and is sure to annoy your opponents. But how can we take this even further?

We simply have to play more games by making the overall winner the player who achieves the first to five wins. There are little pin inserts on each Guess Who board to track your progress up to five wins. These are the same rules they use in tournaments.

Playing to five wins boosts our overall chance of winning significantly, as our advantage multiplies with each win. Our 80% win rate, across the entire game, multiplies up to about 96%, as we have up to nine attempts to win just five games with such a high win rate.

Back to Word Unscrambler