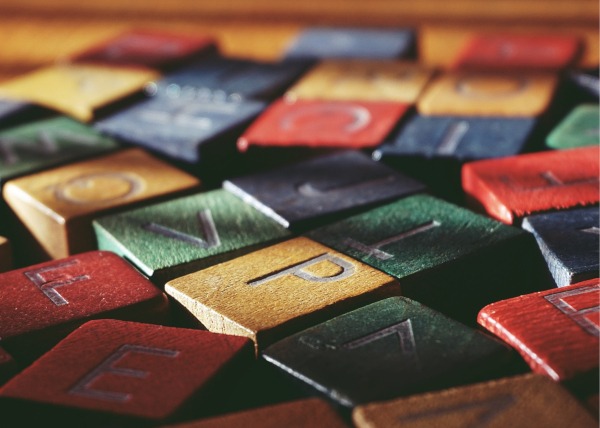 Simply put, an anagram is a rearrangement of a word or phrase to create a new word or phrase with the exact letters the first one contains. Anagrams are a literary tool that have been around as long as words have. They are particularly helpful to enthusiasts of Scrabble and Words With Friends because they help to create more words from a single rack of letters.

Let's start creating anagrams with the word itself, Anagram:

Anagrams can also be used as a literary device to make a comment on the first word or phrase. The anagram itself can be an oxymoron or humorous play on words. Some classic examples include:

You can have fun experimenting with anagrams starting with your own name. For example, my name is Olivia. What can we make out of those letters?

Olivia
Vivilo Aivilo Violai… There are no real words that can be made with the six letters of my name. However, if you use only five letters, the words Aioli, Viola, and Voila can be spelled. Try making anagrams with your name and see how many you can create!

You could also use this anagram solver to check how many words you're able to make with a given set of letters.

Many writers throughout history have used anagrams as a tool in their writing. Shakespeare’s Hamlet is an anagram of Amleth, a legendary Danish prince who inspired the famous play. A more modern example is J.K. Rowling’s use of an anagram for the antagonist of the Harry Potter series. Tom Marvolo Riddle uses his own name as an anagram to come up with his evil moniker: I Am Lord Voldemort.

Those familiar with the Da Vinci Code know that anagrams play a big role in the clues to solve the puzzle. For example, the solution to the code “oh, lame saint” was The Mona Lisa.

In the 17th century, anagrams were all the rage in Europe. They were so important to Louis XVIII of France that he hired a Royal Anagrammatist to entertain him and his court. The anagrammatist’s name was Thomas Billon, and his full time job was to write prophecies, poems, and jokes in anagrammatical form.

So… Why do Anagrams Matter to You?

Aside from being fun and interesting, anagrams are one of the most useful tools to have in your arsenal when playing games like Scrabble and Words with Friends. Practicing and experimenting with anagrams will train you to see words in a different way. You will begin to see all the different possibilities of a word or phrase automatically.

In both Scrabble and Words with Friends, you have a rack of 7 tiles at all points throughout the game. Essentially, you’re playing a game of anagrams the entire time. Your goal is to choose the highest scoring word from your rack of letters to place on the board.

The more you get used to creating anagrams, the more possibilities you will be able to see on your tile rack throughout the game. This will help you quickly and successfully find the highest scoring combination of letters as you play.

How to Become an Anagram Expert

Or shall I say…
Aegean boxer promote watchman?

The best way to improve your anagram creation skills is to carry around a small notebook and at any spare moment, write down a word or phrase. Below the word or phrase, rearrange the letters to create as many anagrams as you can. Even better, choose 7 random letters and come up with as many different words as possible out of the letters. Start with 7 letter words, which would be a “bingo” in Scrabble or Words With Friends if you were able to play a word with all 7 of your letters. Once you have created all the 7 letter words you possibly can, move on to 6 letters, 5 letters, and so on.

The more you do this, the more your brain will learn to recognize patterns within letters, and you will naturally be able to see anagrams in any rack of 7 letters you may come across.

When you move on to longer words or phrases, creating anagrams becomes more and more difficult. You end up with too many options and it’s harder and harder to create something that makes sense, like the “How to Become an Anagram Expert” example above. The anagram “Aegean boxer promote watchmen” makes no sense and isn’t grammatically correct. There are thousands of anagrams that could be created out of the given letters, and it becomes too overwhelming to solve.

If you’re looking to sharpen your anagram skills to be better at word games, stick to 7 letters when practicing. Soon enough, you’ll be able to take any rack of letters given to you to create a high scoring word. If you try and create anagrams with long words and phrases, it can become overwhelming quickly.

Let’s use some 7 letter sets and see how many combinations we can use to create new words. The goal is to get you prepared to get the rare bingo the next time you play Scrabble or Words With Friends.

Your rack contains the letters SCRAENT You can create the following 7 letter words with these letters:

5 entire 7 letter words from one set of letters is uncommon. The addition of the letter S adds many possibilities for longer words. Lets try a more difficult set of letters.

Your rack contains the letters LAEDIGN
You can create the following words with these letters:

Let’s try one more set of letters to practice our anagram making skills.

Your rack contains the letters MDTEIME
You can create the following words with these letters:

These are just the 7 letter words that come from one single rack of letters in a game of Scrabble or Words With Friends. You can create dozens of words with less than seven letters from these same sets.

I hope that you’ve finished reading this with a better understanding of anagrams and their importance in becoming an expert at Scrabble and Words With Friends. With time and practice, you will begin to generate anagrams with any 7 letters the game puts on your rack.